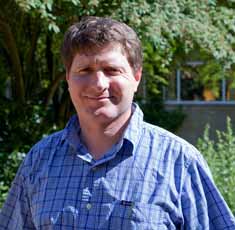 Ian Agol (Los Angeles, 1970) is Full Professor at the Mathematics Department of the University of California (Berkeley), where he currently holds a Simons Chair. Agol’s work revolves around the topology and geometry of three-dimensional manifolds, a vast area of research that is intimately linked to other fields of mathematics, notably group theory and the deformation theory of Riemann surfaces. Among his contributions, Agol has solved a number of fundamental long-standing conjectures, including the Marden’s Tameness Conjecture (which in turn implies the Ahlfors’ Measure Conjecture), Thurston’s Virtual Haken and Virtual Fibering Conjectures.

Agol received the Breakthrough Prize in Mathematics in 2016, for his “spectacular contributions to low dimensional topology and geometric group theory”. He has also been awarded the Oswald Veblen Prize in Geometry (2013), the Senior Berwick Prize of the London Mathematical Society (2012), and a Clay Research Award (2009). He has been ICM Speaker in two occasions: in 2014, as a Plenary Speaker; and in 2006, as an Invited Lecturer. He is a member of the National Academy of Sciences since 2016. He serves as editor at Journal of the AMS and Annals of Mathematics.

The Lab’s research is situated at the interface of the fields of algebra, geometry and topology. The seminal work of Thurston and Gromov in the 1980s offered a completely new framework for studying manifolds and groups, two classes of objects that permeate every single area of mathematics research. It marked the birth of modern geometric group theory and low-dimensional geometry and topology, two twin areas which, in turn, found their roots in earlier work of Dehn, Ahlfors, Mostow, Margulis, Sullivan and many others. All of a sudden, historically unapproachable problems where within reach, and a string of long-standing conjectures was being proved: Thurston’s Geometrization conjecture (Perelman); Marden’s Tameness conjecture (Agol (Lab Chair), Calegari-Gabai); Waldhausen’s Virtual Haken conjecture (Agol (Lab Chair) and Wise); Thurston’s Ending Lamination Conjecture (Brock-Canary-Minsky).