Interview with Ragni Piene, chair of the Scientific Council of the Fondation Mathématique Jacques Hadamard and gender equality advocate. 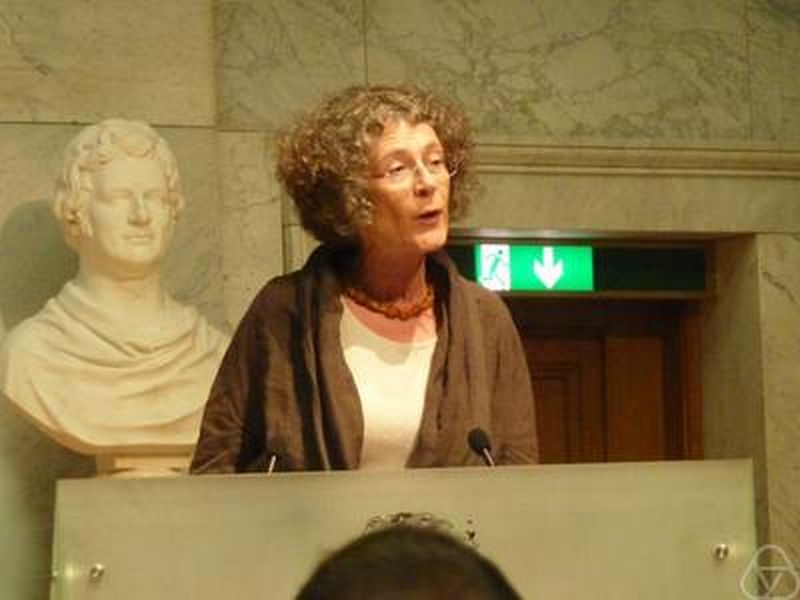 Her outstanding trajectory has been recognized by different institutions: she is a Fellow of the AMS and a member of the Academia Europaea and the Norwegian Academy of Science and Letters. She has been a member of several committees during her career, like the Executive Committee of the International Mathematical Union from 2003 to 2010, and the Abel Committee from 2010 to 2014. Currently she is chair of the Scientific Council of the Fondation Mathématique Jacques Hadamard.

Would you like to tell us a bit about trajectory, what difficulties did you encounter?

I come from an academic family, and my father was a mathematician so all of my high school teachers and all the professors in the Mathematics Department knew who he was. So I started University from a privileged position. There was never any question that I, as a woman, could not do mathematics, and this became an attitude.

I think my difficulties were more due to myself than to exterior circumstances – I wasn’t quite sure if I wanted to be a mathematician, I had other interests too. So at some point (after my father died, when I was 21) I decided to go to Paris for a year. I thought it would be exciting to study mathematics and learn French. And it was a great year, but also from a mathematical point of view very, very challenging. I was used not to working hard, just passing my exams with good results, and here I couldn’t, I didn’t understand anything. So it was really tough. But it also made me understand that I actually wanted to try to continue in mathematics.

Later, after I was back in Oslo and I’d done my master’s thesis, I was basically told by two professors in my Department that I should go to MIT and do a PhD. So I did! I should say that I was really encouraged to do that. Without that encouragement, I would not have done that and I would have not ended up as a mathematician. So it was really important for me. So, I think that I did get encouragement more than meeting obstacles. Of course there were obstacles, but they were not as serious for me. I was encouraged when I needed to be encouraged.

You have been the only woman, or one of very few women in many contexts: during the Ph.D. at MIT, in the Abel Committee, in the IMU. Did you ever feel out of place?

Yes, at MIT there were very few women. There were no women professors except one visiting professor, Dusa McDuff. I got to meet her in my first year at MIT and that was really great. She told me she had never met women mathematicians before! There were also some women graduate students, and also some at Harvard. We took courses at Harvard, but none were given by women professors. It took them a very long time, actually much longer than MIT. But that was the way it was. I mean, there were very few women, but I always liked being with the boys. I had some very good friends that I studied with, and just very few women, but still, it was ok at MIT.

At IMU, I was suggested for the Executive Committee by a colleague in my Department. I was his second choice, but the person who was first choice didn’t want to have anything to do with it. So he suggested me, and then I was elected at the General Assembly and it was the first time that there was a woman on the Executive Committee at IMU. That committee was really nice. John M. Ball was President. He is a fantastic person and we really got along. And I was scared at the beginning, but it was really, really nice. We worked hard and there was a good atmosphere. And it was a very pleasant experience.

After 4 years I was re-elected for another four years, and then there was another woman in the committee. So at least a trend was started. It is has not developed very much since, though. There was also a woman president, Ingrid Daubechies, for four years. So yeah, things change, but they change slowly. In the Abel committee, I was also asked to serve and I was quite terrified. But I realized that I would have a committee with really strong people on it so that also, I think, worked ok. It usually works out, it just needs to be a bit scary at the beginning and then it’s ok. You just need to throw yourself into it.

Speaking about your stay in Paris in an interview to the EMS you said that you were ‘pleasantly surprised to find so many women when you were to Paris but the trend has been broken’. Could you elaborate about it?

I remember that when I went to the first classes I noticed that there were so many women students and I thought that this was fantastic. Of course, no women professors were teaching these classes; I never had a woman teaching me a math class. Later I realized that not all the women students stayed and, those who stayed, mostly became assistants. Very few of us reached the professor positions. Thus, things were not as good as I initially thought.

At that time in France, the École Normale Supérieure, selected the best students and admitted as many women as men in mathematics because they had different schools for women and men of equal size. There were a lot of women accepted in this prestigious school that studied mathematics after that. However, at some point they stopped segregating by sexes to go for gender equality. This had rather disastrous results because suddenly hardly any women got accepted.

This has sort of marked a lot of what happened in France afterwards. Once I tried to figure out the number of women that have given a talk at the Bourbaki seminars, which is very prestigious. I went through the list of the 600 first seminars up to year 2000, and 9 were given by women out of 600. After 2000 the numbers are slightly better because in France there is some awareness about this.

You have participated in many projects related to gender equality. What have you learnt over these years?

Let me start with the European Women in Mathematics. I was there essentially from the beginning. This was a very pleasant experience, because you got to meet women mathematicians from other fields. Until then I’d only met women from my own field, not even that many. But in this organisation people come from all kinds of fields in mathematics, so it was a much broader thing and there were meetings, projects… It was a very nice experience. I was starting to think about how long this organisation was going to last, and if it was necessary to continue having it. I remember somebody said: “Do you really want to organise women separately from men? Isn’t that a bit old-fashioned, is that necessary?” It turns out that women still think it is necessary.

In fact, what I see is that not only in Europe but, for example, in Latin America, in Asia, in other parts of the world (I mean, questioning the US, they started their association of women in mathematics before the European Women in Mathematics), there is more organising among women than before. It’s not that this is dying out because there is no need for it anymore, but it seems that also young women feel that these things are good.

It is disappointing in some sense, because you would think that there should be so many women mathematicians now, do we really need to have this? But somehow it still seems to be necessary and it’s really nice to get networks to know women in your own situation.

Would you have done anything differently in your career? Have your perspectives changed?

I am very happy with my mathematical life, it has become much more than I could ever expect. At some point I thought “If I don’t go to the US to get the Ph.D. then I will probably end up as a high school teacher”. This could also have been a good thing to do, or maybe not. The life I have is very different from what I imagined at that point.

The joy with mathematics is not only that the research is your hobby, the teaching and meeting the students is also great, and traveling and having friends all over the world is fantastic. In addition, it is flexible so that you can have a nice work-life balance; most of us combine life and mathematics, which is good. Looking back I could have been more determined in my career, or I could have worked harder, but I can recommend being a mathematician.

What advice do you have for young women who are beginning their careers in mathematics?

First of all, you have to be sure that you really like doing this job and not having doubts. In addition, most of us start to think that we are impostors, that is, we don’t know enough, or we are stupid and nobody found out yet. We need to avoid getting into this trap; we have to trust our judgment and to be realistic about what we know and what we don’t know. Again, if you want a career in mathematics, you need to be able to not give up studying. It is great to have people encouraging you, but you have to encourage yourself if you don’t. My advice is: don’t let them trample on you, don’t let them throw you down, don’t let them ignore you. You have to stand up for yourself because it is getting more competitive; the situation is now worse compared to the time I was young.

It is not easy to get the job at the university as mathematician in many countries, and it is important to know that there are other possibilities. At some point you may have to decide if you want to stay in academia above everything else, or you rather prefer to stay in a particular place. In that case, if you lose the opportunity to work on a specific university, you may look for another kind of job. The mathematics education allows finding easily good and interesting jobs; I don’t think that leaving academia is a catastrophe, I have several students who left, and they are very happy.

Luck is of course involved when finding the right job, the position should be opened at the right time, and you should have certain options. This is not anything you can plan; you may decide to try, but you won’t be sure that you succeed.

That’s true! And it is good to hear it. Thank you very much!